History of the Kin Club of Cambridge (Preston) Inc.

1945        The clubs held a fundraising dance for the Milk for Britain campaign. 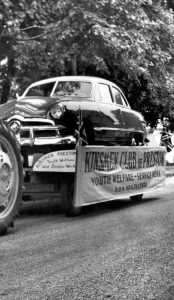 1967        As part of the Canada Centennial Year celebration, the clubs ran Calypso Days, which included bringing 60 performers from Jamaica, as well as a parade and a calypso show on July 1st.

1976        Made a successful bid with the Galt Kinsmen Club to have the Kin National Headquarters built in Riverside Park.

1991        Kin Centre funded and opened, providing space for our rental hall and for the Preston Figure Skating Club.

2016        The Kinsmen and the Kinette Clubs of Preston merged to form the new Kin Club of Cambridge (Preston) Inc.

There are no upcoming events at this time.